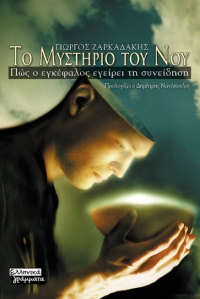 The scientific study of consciousness has intensified over the past few years. New technological developments in measurement and computer simulation have enabled the closer investigation of one the most “mysterious” phenomena in nature, namely the subjective experience of awareness. Neuroscience, aspiring to offer a complete theoretical framework for brain dynamics, has greatly advanced the level of understanding of the intricate machinery of the brain. Recently, the field has been enriched with radical ideas from quantum physics and yet no concise scientific theory of the mind exists so far.

The book’s theses is based on an academic paper by the author (Zarkadakis, G. (2001), “Noetics: A proposal for a theoretical approach to consciousness”, Proceedings of International Conference “Toward a Science of Consciousness: Sweden 2001; Consciousness and its place in Nature”, University of Skovde, Sweden, 7-11 August 2001.) that proposed a theoretical framework for such a theory, based on systems theory and cybernetics.
The proposed theory is called Noetics (the science of the mind) and aims to identify systemic causalities between processes in the brain that give rise to emergent noetic phenomena.

Noetics thus seeks to construct a theoretical framework and experimental paradigms to explore the interrelationship between those causalities. A possible “Noetic theory” arises by regarding the brain as an entropy-reducing computation machine where massively parallel computations at the neural and sub-neural level give rise to noetic phenomena in groups of neurons at various anatomical areas of the neocortex. These computations may be of a fundamentally quantum nature – as it has been suggested by other researchers – although this is not necessary to arrive at the information magnitudes necessary for consciousness. Complexity and information theory suffice to provide the theoretical base for further exploration. In this context, Consciousness arises around attractors of neural computations called “critical points”, which link the various categories of noetic phenomena together.

A book that expanded on the cybernetic Noetic Theory was published in Greece (“The Mystery of Mind: how the brain evokes consciousness”, published by Ellinika Grammata 2001).