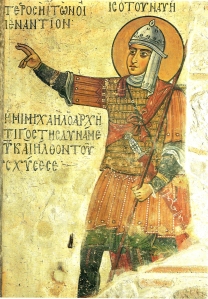 A soldier of the eastern Roman empire (republic)

I just finished reading “The Byzantine Republic“, a wonderful book by historian Anthony Kaldellis. In the book the author argues that “Byzantium” should be viewed as the continuation of Rome, and indeed that the republican polity of Rome survived in the politics and life of Constantinople as well as the rest of the Eastern Roman Empire, till its very end. This is a thesis that explains many things, including how emperors had to be popular with the people if they wanted to keep their throne (and often their head).

For me, the book offered additional and much-needed elucidation over modern Greek identity, as it was shaped after Greece’s emergence as a state in the middle of the 19th century. As I have argued before, modern Greek national identity is an artefact that was constructed by intellectuals of Greek Enlightenment who, by accepting and adopting the dominant – and rejecting – western narratives about Byzantium, they aimed to dissociate modern Greece from its medieval history and instead root it in the ancient, classical era of Pericles and Demosthenes. In many ways, the tribulations of modern Greece have much to do with the confusion around national identity; as I have also argued in my (much discussed) article for the Washington Post.

Last summer  I happened to be in New York and I was told the following anecdotal story, that demonstrates what I mean.

It was 1912, during the First Balkan War , when the Greek army landed on the island of Lesvos and liberated it from the Ottomans. As the army advanced inside the island taking positions a Greek soldier noticed a young local boy who stood by and looked at the Greek soldiers full of curiosity.  So the soldier went over to the boy asked him why he was looking at the soldiers like that.

“Because I was told that the Greeks were coming”, said the boy in perfect Greek, “and I wanted to see how you Greeks look like”.

“But you are a Greek too”, said the soldier.

Garbage Alchemists describes the life of four creative designers, architects and sculptors in Thessaloniki, Greece who formed a company called “Scoopa”. They dig into garbage and pick things that they transform(“upcycle”) into designer objects. The film was written and researched by George Zarkadakis and directed by Kyriakos Bouyouris for the EU project Energybits.

Greece and europe from George Zarkadakis

On March 25th 2013 I was invited at the Catholic University of Lille to give a lecture on Greece and Europe (see my slides above). My lecture explored some of the ideas in my Washington Post article.

March 25th is Greece’s National Holiday commemorating the Uprising against the Ottoman Empire in 1821. My talk attempted to provide a historical insight to the lack of trust between Greece and Europe. This lack of trust has become evident during the crisis. It plays very strongly nowadays in the Cyprus crisis. Since 2009 German media, and German voters, subscribed to the narrative of Greeks being untrustworthy, liars, lazy, embezzlers of other people’s money, etc.; and that they should be punished. Greek media, and Greek voters, adopted an equally hostile stance against their German “saviors” by portraying Chancellor Merkel as a female impersonation of Hitler and claiming that Greece is under a new German Occupation. This decoherence persists five years later and getting worse. Why?

In my talk I tried to give a historical perspective to this uneasy relationship between Greece and the West. It is often that the actions of people and nations are conditioned by cultural stereotypes. Indeed in times of crisis, when rational thinking and analysis is in short supply, automatic behaviour takes over. The engine of automatic behaviour is heuristics based on stereotypes. Cooler minds wishful to understand what is really going on, are advised to analyse the roots and source of stereotypes. And that was the objective of my talk.

My talk began by introducing three persons whom I consider important in the different ways that Greeks and Europeans regards each other: East Roman Emperor Alexius I Comnenus, German historian Jakob Philliipp Fallmerayer, and English naturalist Charles Darwin.

I went on explaining the idea of “Hellenism” in archaic and classical Greece; i.e. the idea of a cultural unity of people sharing the same language, religion and customs – and explained how it resembled the modern idea of “nation” but also differed, since for ancient Greeks it made no sense to have a “nation-state”. Greek city-states had a long tradition of fighting with each other.

Alexander changed that by uniting the Greeks and invading the Persian Empire. The result of his expedition was that Hellenism transformed from an exclusive to an inclusive idea: the Near East adopted the Greek language as lingua franca. The Hellenistic era was also responsible for geographically (re)positioning, and lodging, “Hellenism” from the Aegean and “Europe” (Southern Italy and Sicily were as Greek as Asia Minor and Greece proper) in the Near and Middle East and thus away from the West. (Interestingly, Alexander’s next military goal was to attack Rome and expand to the West, but he died before embarking on that plan).

Then came the Romans. In the centuries starting from the sacking of Corinth in 146 BC leading to the closure of the Athens Academy and the cessation of Olympic Games, and all the way to the reign of Emperor Heraclius, Hellenism gradually (and sometime violently) dies. The Eastern Roman Empire becomes a place of Greek-speaking Romans worshiping the One God Jesus. Inhabitants,  rulers and ruled, consider themselves to live in God’s kingdom upon Earth. As the Western Roman Empire is run over by Goths and other barbarians, the Eastern Romans feel that they are the only true descendants of Rome.

The Greek-speaking Roman Emperors of Constantinople get their first great shock that something has changed in the “barbaric” West when Charlemagne becomes Roman Emperor in 800AD. From this point on the Latin-speaking West is seen as an adversary by the Greek-speaking East. Things become progressively worse with Otto the Great’s coronation in 962 AD and arrive at an open, ideological, conflict with the Great Schism of 1054 AD. And then, only a few years later during the reign of Alexius I Comnenus, the First Crusade arrives in the East…

Alexius I Comnenus was the man who convinced the West that “Greeks” were not to be trusted when he failed to support the crusaders during the siege of Antioch. This was not due to Alexius being untrustworthy but because of the different world views between him and his western allies. For Alexius what was important was the integrity of his kingdom; this took precedence before supporting his Christian allies.

Interestingly, by then the West used to call the Eastern Romans “Greeks” not only because of their language but because westerners wanted to diminish easterners; by calling them “Greeks” they suggested that they were not “real Romans”, and not “real Christians”. Alexius’s daughter the historian Anna Comnena, accepted the characterization and turned it on its head: the Eastern Romans were indeed “Greeks”! “Hellenes”! The descendants of ancient Hellenes! Thus Anna, to counteract the rising military and political power of the West rediscovered Hellenism. The “Greeks” of Constantinople, as the Hellenes who founded civilisation, were now once again “superior” to the western barbarians. If there was any love left between East and West it was lost completely in 1204 AD when the Fourth Crusade sacked Constantinople and replaced the Greek-speaking monarchy with a Flemish one.

The Greeks reoccupied Constantinople and the Empire survived for a little while longer, till the arrival of the Ottomans in 1453. For the next four hundred years the Ottomans provided a safe haven of the crystallization of Hellenism as the dominant idea of Greek-speaking people within the Ottoman Empire. The antagonism between Greeks and western Europeans was thus further attenuated.

In 1821 Greeks fought for independence and in 1830 a Greek State was created in southern Greece. But who were these “new Greeks” that inhabited it? And how close were they to the ancient Greeks?

The dominant ideology in Europe at the time was race-based, and so the German historian Fallmerayer claimed that the new Greeks were in fact Slavs, Vlachs and Albanians. To oppose this idea Greece developed its national narrative based on race (“genos”); the narrative was institutionalized by the historian Paparigopoulos and persist to this date as the official history that Greek children learn at their school; i.e. that modern Greeks are direct, biological, descendants of ancient Greeks. This narrative is nationalistic, racist and unscientific – as shown by Charles Darwin and proven by evolutionary biology. Not surprisingly, Darwin is only taught at Greek schools as a “selective subject”, and even at Greek Universities biology students learn about evolution in their final year! I therefore consider Darwin important, indeed vitally important to this narrative decoherence, by his omission!

The racist, unscientific, historical narrative of Greece legitimizes the ideology of far-right party Golden Dawn and wins them popular support from Greeks who were taught exactly those things at school. It underpins the rhetoric of every other political force in Greece (excluding libertarians) who views Greece as a “victim” and  “under occupation”. For most Greeks who suffer a brutal recession “Europe” is once again the un-Christian (i.e. protestant, catholic) barbarian who wants to destroy Greece because of envy.

There can be no relationship of trust between Greece and Europe unless we all understand our history, and our biology, better.