Would you make love to a machine? Although this question may strike one as ludicrous, science’s answer is that it all depends how the machine looks like; as well as whether you are a man or a woman. As evolutionary psychologist Steven Pinker tells us in his book “How the mind works” males of many species are aroused by all kinds of objects that resemble, ever so slightly, females including – and I quote – “parts of stuffed females such as a head suspended in mid-air, even parts of stuffed females with important features missing like the eyes and the mouth.” Human males are further aroused by charcoal drawings of breasts and vulvas that they enjoy carving on tree trunks (in foraging cultures), as well as the sight of anonymous females eager for casual sex that populate the world’s pornography industry (in industrialised societies like yours). The – mostly male- human mind seems hardwired to get horny with the faintest hint of a possible sexual partner. Indeed, a visit at your local sex shop will convince you that exploiting the vivid imagination of the male mind has come up with numerous, awkward and sometimes horrifying-looking, variations of deconstructed sexual femininity. 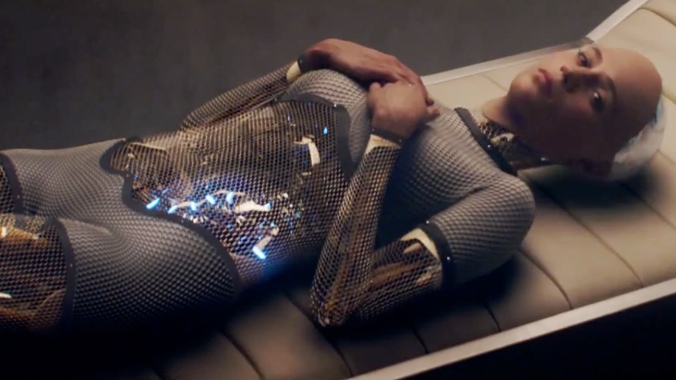 But what about artificial sexual partners who actually look and behave like humans? The question has been explored in literature and movies since centuries. Ancient Greek myth tells us of the sculptor Pygmalion who fashioned Galatea out of marble, then married her. And who can forget Maria, the luscious robot, in Fritz Lang’s epic Metropolis? If so many men cannot tell the difference between a plastic vulva and an actual woman, it is not hard to postulate how they might feel coming across a perfect simulation of a woman. For example, someone like Rachel in Blade Runner, or Ava in the recently released film Ex Machina. What makes Alex Garland’s film ever more pertinent in this discussion on the limits of human sexuality is that Ava is an imperfect female simulation. Apart from her face, hands and feet, the rest of her is most visibly, and transparently, mechanical. And yet she manages to easily seduce human programmer Caleb, as well as – I bet – most of the males who’ve watched the film. Unlike Keyko (who reveals her robotic identity much later) Ava presents herself, right from the beginning, as an object of sexual desire unashamedly made of mechanical parts; and succeeds to passing the Turing Test on screen and, I would argue, among the aisles too.

As Artificial Intelligence and robots evolve girls like Ava will increasingly begin to populate human homes. Undoubtedly, there will be mechanical boys too. In the beginning there will be many who would doubt that these mechanical sexual partners are anything but animated sex dolls. But as these Avas acquire more sophisticated ways to move, speak, and love, they will ultimately enter our consciousness and pass the Turing Test of our hearts. We will fall in love with them, like Caleb or Pygmalion. If Pinker is right, this is not going be difficult. The era of human mechasexuals will have arrived. A new human gender will demand equal rights with homosexuals and heterosexuals, to live with their mechanical partners, marry them or adopt children. And thus artificial humans will enter our society, not as hard-working, ugly-looking robots labouring at our factories but as beautiful and caring lovers, never-aging, forever faithful, holding our hands and telling us what we need to hear, till the end.

(This article was originally published in Huffington Post/Tech UK)