Isaac Asimov and Philip Dick in novels about robots and androids often explored what it means to be human. In doing so they have noted that Artificial Intelligence is mostly about thinking and being conscious of thinking. But what about feeling? How about emotions? Can androids “feel” like humans, forge relationships and friendships like we carbon-based lifeforms do? 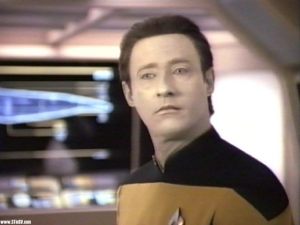 In Star Trek Commander Data is a sentient android created by Dr. Noonien Soong on planet Omicron Theta. With its narrative roots to Robbie the Robot from the movie “Forbidden Planet” Data is a hyper-intelligent super-being which nevertheless lacks the most essential element of humanness: the ability to empathize. Often he must imitate expressions of emotion in order not to upset his human colleagues, whilst feeling nothing in reality. Thus he remains forever an outsider to human society. The “problem”  is solved when Dr Soon equips Data with an “emotion chip”.

Commander Data before the emotion chip exhibits many of the symptoms of a form of autism called “Asperger Syndrome”. People with this syndrome often have IQ above average both in language and cognition, however they suffer from an impaired ability for social interaction. Like Data they seem to lack the ability to empathize. Although there is no conclusive evidence with regards to the cause of Asperger Syndrome and autism in general, the syndrome affects information processing in the brain by altering how nerve cells and their synapse connect and organize.

Simon Baron-Cohen, a psychologist at Cambridge University, has suggested that autism is a result of delayed development of a “theory of mind” in certain children. In short, “theory of mind” is what we acquire approximately at the age of three as a result of brain development, and we begin to realize that other people have “minds” of their own. Theory of mind produces the feeling that other persons are conscious, like us; and we must therefore respect their feelings. It is also the reason we lie to others (we aim to trick their minds) and enjoy theatre and movies (we can suspend our disbelief that what we see on stage is not, in fact, real).

This feeling of “the other mind” is often challenged in people suffering from a variety of neurological diseases, such as Capgrass Syndrome and autism. Factors of evolutionary selection may be at play. People with autism, according to Baron-Cohen’s research, are severe cases of the “male brain”. Males are less empathetic than females, because evolutionary history required females to forge stronger emotional bonds with their offspring and family. This hypothesis, if true, may explain why the ratio of autistic boys versus girls is so profoundly biassed. Epidemiological data from the US show that the ratio is 5.3 cases of autism in boys versus 1.5 in girls, per 1000 children. 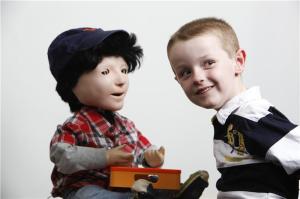 Enter the robots. Faced with robots and androids non-autistic people feel increasingly unnerved as the artifact begins to look and behave more like a human. This is a phenomenon called “uncanny-valley”. Interestingly, autistic people feel the contrary. Recent experiments at the University of Hertfordshire have shown that robots can be used as therapeutic tools for children with autism.

KASPAR (Kinetics and Synchronization in Personal Assistance Robotics) robots can be programmed to help children with autism learn how to distinguish between friendly and unfriendly behavior. The robot is designed to look as featureless as possible, something that helps the children to approach it without fear or confusion.

Professor Dautenhahn who leads the project and her team will experiment with many more autistic children in the near future. Commander Data would have applauded. Perhaps interacting with another robot, rather than the noisy humans aboard USS Enterprise, would have rendered installation of the “emotion chip” unnecessary.