What is the difference between thinking and appearing to be thinking? How can one tell them apart? An interesting answer comes from philosophy of mind in the shape and form of zombies.

A philosophical zombie (or “p-zombie”) is a hypothetical being indistinguishable from a human but without conscious experience, or “qualia”. When pinched, a p-zombie will feel nothing but will nevertheless cry “ouch!” convincingly enough, so that we will be unable to tell the difference.

P-zombies have been used by dualist philosophers in their attacks of physicalism. Dualists believe there are two essences in the natural world, matter and something else beyond the scope of science. Physicalists hold the view that everything is matter and nothing else exists but matter. In the case of consciousness physicalists believe that our thoughts and feelings can be reduced to neurobiological interactions. Au contraire, dualists claim that consciousness is much more that the sum of biological pathways and brain states.

So let us imagine a hypothetical world of synthetic beings with artificial intelligence looking and behaving identically to us; a mirror world of artificial p-zombies on another planet or another dimension. Now say that something happens and while you were asleep you were transposed in that mirror world, whilst your double p-zombie was zapped over here, to our “real” world. When you wake up, how will you tell which world you inhabit now? And how will your friends and family tell that the “you” who walks down the stairs for breakfast is in fact a p-zombie from a mirror universe?

The answer to both these questions is the same: neither you, nor your family will know the difference.

In fact, both physicalists and dualists are at a loss in suggesting a way to distinguish the two world experiences. The former because for physicalists a p-zombie is impossible: as said, a physicalist believes that consciousness is the result of physical processes. If a zombie is the physical equivalent of a non-zombie, if every cell and function has been precisely copied in the zombie as is in the non-zombie, then there can be no distinction between the two.

A dualist will also be unable to resolve your conundrum but for a different reason. She will not have any test to offer that may tell which world is the real one and which one is the zombie-world. Such “test” would require third-person verification, i.e. some objective measurement of “something”, in other words it must be a scientific test. But dualists believe that the extra essence that separates real beings from zombies is non-physical and therefore impossible to measure by scientific methods.

Whichever you look at it you may never know if you now inhabit a zombie world or a world of “truly” conscious beings. 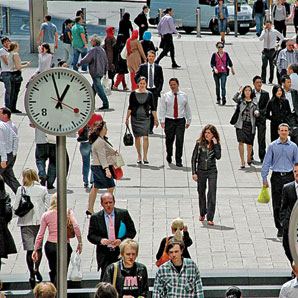 This rather unnerving realization leaves you with the only question that you can seemingly answer in the positive: are you a zombie? Of course not, you may hasten to answer.

But let’s look at your answer somewhat deeper . In answering “of course not” you are in fact asserting your inner experience of “being somebody”, your so-called “self-awareness”.  Of course, as far as we, your listeners, are concerned we must remain unimpressed by your answer. We can neither trust your answer, nor the way you look or behave, because for all the reasons I explained you could be a zombie pretending to be a real human being.

Maybe, for exactly the same reasons, you should be skeptical of your answer too!

For, how do you know that your so-called “self-awareness” is not an artificially programmed agent which when triggered by the question “are you a zombie?” returns the answer “no”? What if this agent while answering places a memory in your artificial memory banks of having just answered the question, thus creating a feedback loop which you, rather arbitrarily, call “self awareness”? What if “you”, your “inner experience”, your “memories”, are programs? What if “you” are the multi-agent, artificial being from the mirror world of p-zombies, which slipped into our “real” world?