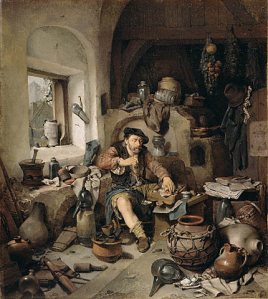 Is science the surest way of arriving at truth? Can we validate its worth beyond anyone’s doubt? Surely, the limits of knowledge have been discussed ad nauseum by the ancients. Aristotle did not approve of Platonic metaphysics, but ask any string theorist what she thinks about the laws of nature and she will tell you maths. Where is maths? Where does it reside, before expressing itself in the motion of bodies or the flow of fluids? Where does music go when the instruments stop their play? Historians of science tell us that once upon the Middle Ages science and magic were twin sisters, Siamese twins living together side by side and forcefully separating not before the time of Descartes. His definition of res extensa was followed by logical positivism a few centuries later; but no one would have given a toss if it wasn’t for the Industrial Revolution. I stand firmly behind this argument: if it wasn’t for the engineering miracles that were produced as a result of scientific discovery, science would have been little more than a pastime for gentlemen and gentle ladies of plenty means and time to spare. Everyone had to bow to the miracles of science because the damn thing worked – and it did so better than prayer. Planes fly after all, not by well-wishing (although I often see many fellow passengers pray during take off) but by engines roaring and good wing design. But do we really know why they fly? I would argue that we do not, not really. We do have a good set of equations available, and a sound theory of aerodynamics that we teach to college students, but this corpus of descriptions sits uncomfortably on top of vast, unwavering void of stark ignorance. At the end of the scientists’ day what remains in the Petri dish, or the computer printout, or the spectrum of a far away galaxy, are unanswered questions followed by more unanswered questions. Some call this a virtue. And why not: there is certainly something alluding to heroism in a person willing to face mysteries whilst remaining agnostic. Heroics apart, however, the bottom line is that working the miracles of science was, and still remains, the biggest mystery of all. The body of knowledge is riddled with holes, curious singularities where our notions precariously stand. I would like to give three ready examples of such “singularities”. First, the Big Bang; and of course all that follows it, which is the whole of physics. Our descriptions of the universe, mathematical as they are, should not be confused with knowledge. Secondly: Life, the origin of. How did it come about? Thirdly: the mind. If you have doubts about those three examples, let me put them in another way. The litmus test of true knowledge is the power of reproduction. If I know something – truly know it, not suppose it – then I can reproduce it, nominally or otherwise. If we knew, or came to know, the nature of the Universe, of Life and of the Mind, we could easily reproduce all three of them. We do not (not “yet” some will say, but I dispute that). What we do (re)produce are similes; or simulations of. Scientists are ignorant miracle-workers performing in the circus of history while the rest of world watches in amazement. How long more will the show last? A good answer would be “when the miracles run out”. And then what? What will follow science? A retro-religious era perhaps?

2 thoughts on “The ignorant miracle-workers”